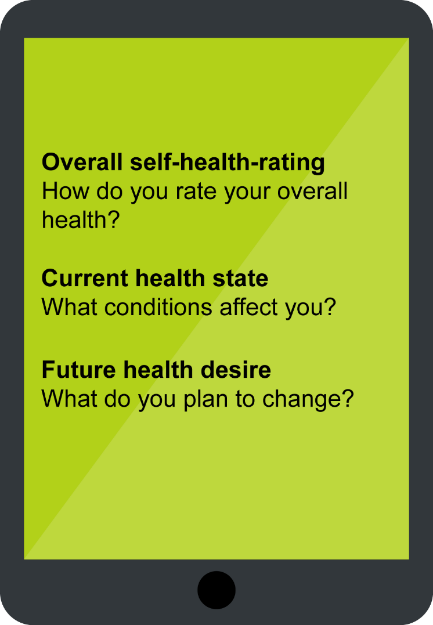 hot survey was designed not only to capture demographic information but as an analytical tool in itself. In addition to demographics, it was composed of three parts:

The snapshot was designed in this three-part format by Clever Together as this is an approach used to mine data for signals and patterns that can help cluster people into definable groups. It enables analysts to explore differentials between responses. For example, one would expect, the tally of unhealthy behaviours and conditions to be lower (i.e., a better personal health state), on average, for people who report they are generally healthy, as would their desire, on average, to change their behaviour. However, this wasn’t the case, as we’ll explain shortly. 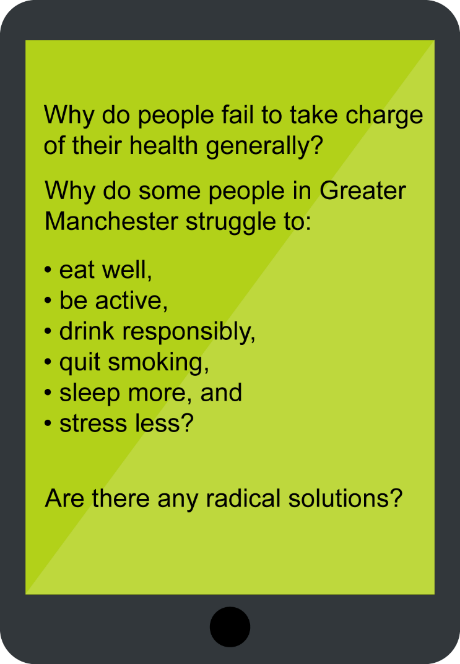 The Taking Charge Together online workshop was designed to give the public the opportunity to:

To achieve this aim we structured our online workshop into eight discussion areas, primarily aligned with the Public Health England #OneYou campaign:

What radical ideas do you have or have you seen that can help people or communities to take charge of their own physical and mental health?

Why do so many people in Greater Manchester fail to take charge of their own health generally?

Between 15th February and 31st March, 3,737 people joined the public online workshop, 20% of which became “most active” participants, sharing 4,537 ideas comments and votes across the 8 challenge questions.

The benefit of using an online workshop is that we have a digital record of what people think and say that can be mined for themes and signals using the latest qualitative research techniques. This means we avoid the risks in typical workshops of the facilitator cherry-picking the data or participants feeling too embarrassed to say what they really feel in front of their peers.

We’ve been asked “is this digital approach better suited to younger people?”.  The data showed this was not the case. While 31% of the people who completed the snapshot were under 35, only 15% of those who were the most active in the online discussion were under 35. Conversely, 55% of the active online workshop participants were aged 45 to 79, whereas only 33% fell into this age range in the snapshot survey. It would seem our methods empowered older people, despite the concerns of some.